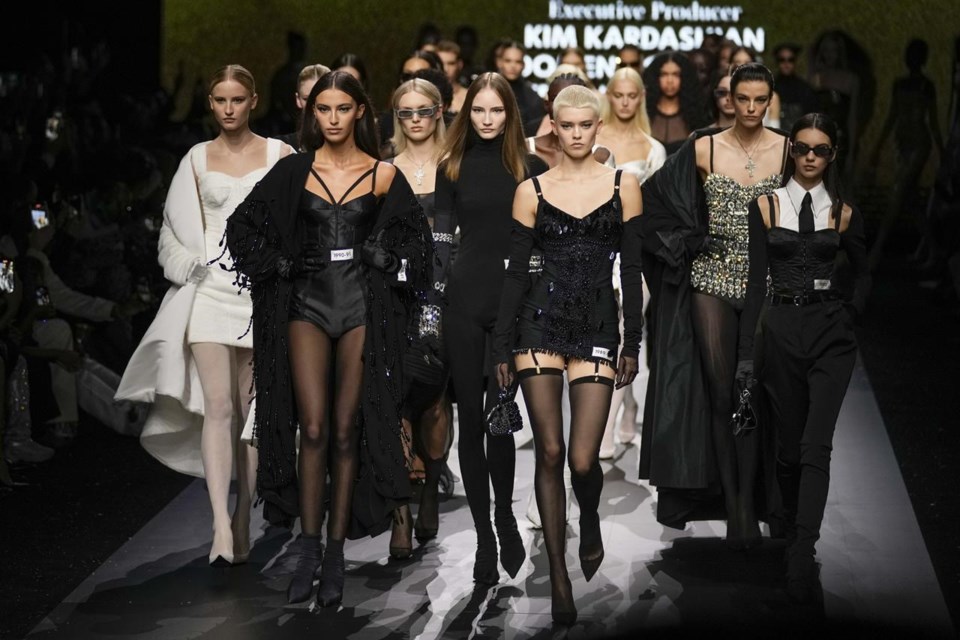 Designers Dolce and Gabbana presented their Spring-Summer 2023 collection curated by Kim Kardashian against the backdrop of a film showing Kardashian, styled as a starlet, eating a plate of pasta.

You just don’t take s**t from anyone when you are here and wearing Dolce & Gabbana,’’ Kardashian told reporters. “You feel powerful, and strong and sexy at the same time.

Lingerie strongly inspired the collection. There were corsets, incorporated bras and bodysuits, employing all of the designer’s best tricks, from rigid bones for structural elements, to pretty lace and eye-catching crystals.

They were worn with gartered stockings and long gloves, or under beautiful wraps.

Kardashian adhered to a mostly neutral palette: black, gray and beige, with some burgundy. And she the drew the line at prints, completely rejecting the brand’s fruits and florals, causing Gabbana to lament: “She killed me. I said ‘Noooo!’

But she went all in on the leopard.

I would say the boys brought out the leopard in me,’’ Kardashian said. “I think you will see that for me, colour is the crystals.’

The collection was designed with women of all ages and shapes in mind, Kardashian said, with the goal of simplifying designs to help some of the more ornate pieces feel less intimidating.

If you simplify it, more people can feel confident wearing it. And I think we really achieved that in the show,” she said.

Kardashian’s mom, three of her children and sister Khloe sat in the front row. Proud mamma Kris Jenner filming the entire show on her phone.

When Kourtney Kardashian married Travis Barker in Italy, social media swarmed with the vintage Dolce & Gabbana dresses she and her sisters wore.

They were all from Kim Kardashian’s private collection, which she accrued with the help of a book of more than 100 desired Dolce & Gabbana looks she and her stylist compiled years before.

Everything looked insane. It was so fun,’’ Kardashian said of the wedding looks. “I think (the designers) were surprised I came with all my own stuff and I had been collecting it for years. 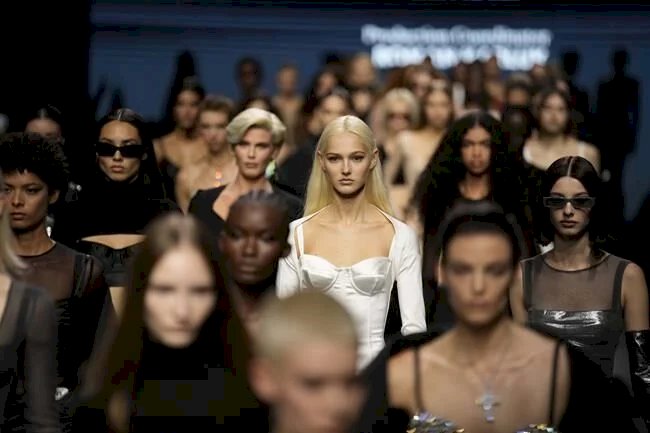 Dolce said the wedding photos persuaded them to dig into the archives, and he approached Kardashian about the project.

We were afraid that the vintages dresses would look old. Instead, they were still contemporary,’’ Dolce said.

And so the new Spring-Summer 2023 collection was born, with the designers selecting looks from the past that they loved, many with memories attached working with models like Linda Evangelista and Monica Bellucci. Kardashian curated from there.

After all these years, this is all of the stuff we would wear today,’’ Kardashian said. “As a designer, I would just think that is so cool, to see everyone trying to emulate the looks.

And why not do a full collection, obviously with some new pieces in there, but just reimagined in a way that we would wear it today, which is so similar to how it was shot and worn back then.

Kardashian’s love of Dolce & Gabbana goes way back, and the affection showed in her curation of their latest collection, drawing on archival looks from 1987-2007.

She remembers growing up watching her mother dress in Dolce & Gabbana for date nights with her stepfather, recalling “she always looked so smart and so strong.

One year, Kardashian's borrowed one of her mom’s black Dolce & Gabbana dresses with a built-in bra and choker to wear for a family Christmas card, a look, she said, “I will never forget.

When Kardashian and her sisters owned a store, she borrowed her father’s credit card to buy a bunch of D&G dresses, jeans and belts before her paycheck came in.

Even the family dogs were named Dolce and Gabbana. Gabbana was a black labrador, Dolce a tiny chihuahua.

It is very close to reality,’’ Stefano Gabbana quipped in a presentation for the new collection.

But no matter how hard she tried, even deploying her mother, Kris Jenner, to help make her case, the designers refused to open their archives. “The past is the past,’’ Domenico Dolce explained. “We try to go ahead with the new generation.”

That is, until Kardashian proved she had the right stuff.