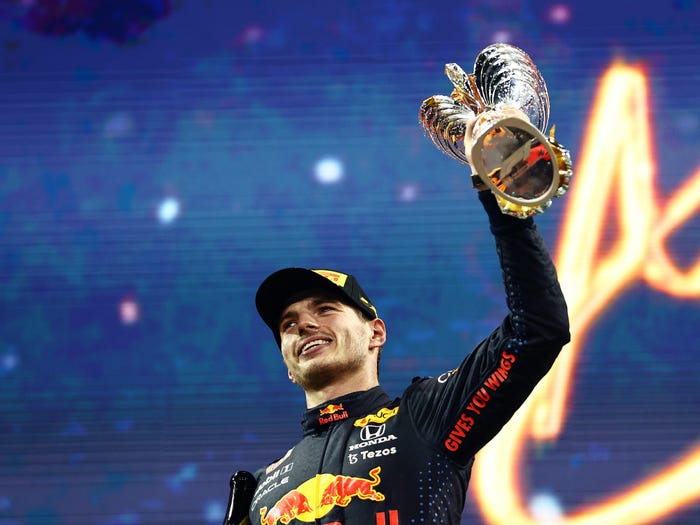 Ferrari botched Sainz’s next tire stop on Lap 47, taking too long to fit his rear left tire. Hamilton stayed out but was losing time to Verstappen as the rain increased.

After a month-long break the season resumes with a triple header in Belgium, the Netherlands and Italy.

He qualified a season-worst 10th because of a loss of power on Saturday, then in Sunday’s race Verstappen did a 360-degree spin.

Unbelievable Max, that is right up there with your best,” Red Bull team principal Christian Horner replied. “Fantastic.”

Russell, who started from the pole for the first time in his career, led 30 laps until Leclerc passed him on the outside as dark clouds rolled over the Hungaroring circuit and a light rain began to fall.

With Leclerc leading, Verstappen undercut for quicker tires. Ferrari made a mistake in choosing the more durable hard tires for Leclerc.

These tires are (expletive),” Leclerc said.

Moments later, Verstappen lost grip and went 360 on track, allowing Sainz to take the lead from Hamilton. Leclerc passed Verstappen, only to lose position soon after because Verstappen had faster tires.

Mercedes placed both its cars on the podium for the second straight race; seven-time F1 champion Lewis Hamilton carved his way from seventh to a second-place finish, teammate and pole-sitter George Russell was third.

Carlos Sainz Jr. finished fourth in another disastrous day for Ferrari. Leclerc was sixth, one spot behind Sergio Perez of Red Bull.

Verstappen’s eighth win of the season was the 28th of the Dutchman’s career.

Who would have thought when we woke up today we’d get this result? Amazing,” Verstappen told his team.

Formula One champion Max Verstappen overcame a spin and his worst starting spot of the season to win the Hungarian Grand Prix on Sunday. His eighth win of the season pushed Verstappen’s lead to 80 points over Charles Leclerc as F1 heads into its mid-season break.

The 2 and half month window for Indian Premier League in...