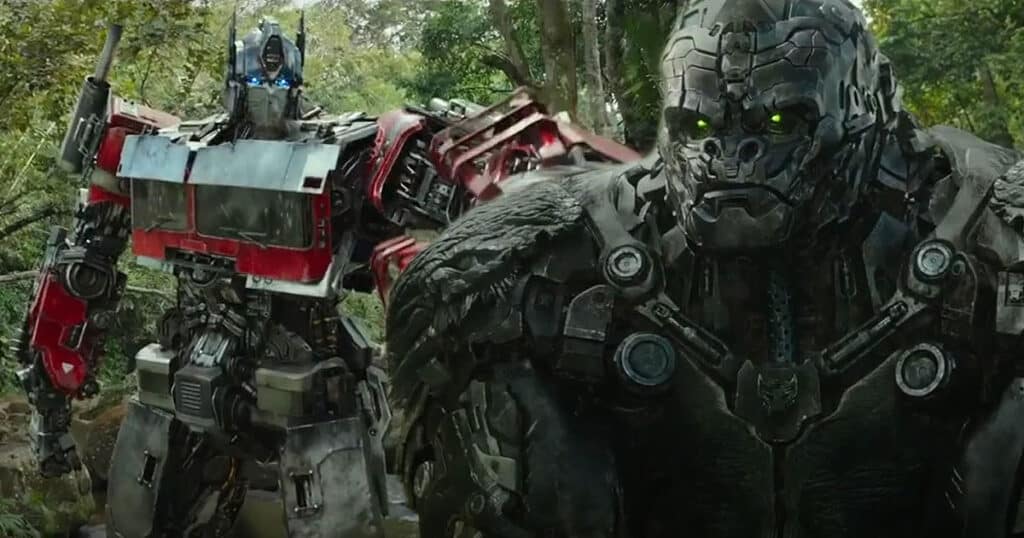 The Transformers: Rise of the Beasts trailer then cuts to a brief look at Bumblebee, who last received an eponymous spin-off film in 2018, with Hailee Steinfeld, and now sports an upgraded design to match the retro theme.

This time, however, the human ally is Noah (Anthony Ramos), who is thrown into disarray the moment his car, sporting a fresh Autobots logo, starts spinning by itself and creating multiple decoy holograms to evade the pursuing cops.

As you might've guessed by their skillset, Noah is partnered with Mirage, the robot that was killed off in 2011's Transformers: Dark of the Moon.

This new reboot version is being voiced by Pete Davidson (The Suicide Squad), who takes over from Francesco Quinn (Platoon), who passed away a week into the release of the 2011 movie.

A couple of action shots give minor glimpses at the soaring pelican Airazor (Michelle Yeoh), the mechanised cheetah Cheetor, and Arcee (Liza Koshy) the iconic female Autobot, who is seen holding onto a Volkswagen van to skate across the highway and dodge incoming missiles. Her human partner is revealed at the very end of the Transformer: Rise of the Beasts trailer Elena, portrayed by Dominique Fishback (Judas and the Black Messiah), who in the usual fashion, is terrified of the Cybertonian at first.

Despite being billed as a reboot, Transformers: Rise of the Beasts serves as a sequel to 2018's Bumblebee. For the seventh film in the Transformers franchise, Michael Bay who helmed the first five movies with Shia LaBuof  returns as a producer. The film also stars the voices of Peter Dinklage as Scourge, Michaela Jaé Rodriguez as Nightbird, and David Sobolov as Battletrap.

“I'm not the one to fear, Prime. There is a darkness coming,” Primal tries reasoning with him. “Of all the threats from both your past and future, you've never faced anything like this.

The Maximals are technically descendants of the Autobots the heroes in the series and while the trailer never explicitly mentions it, the dialogue exchange gives the impression that they're from the future.

The trailer for Transformers: Rise of the Beasts opens with a series of warning title cards, as we're introduced to Brooklyn, New York in the ‘90s.

For millions of years, our world has transformed. But something else has awakened,” it reads, before cutting to a dense jungle inhabited by the aforementioned mechanical gorilla Optimus Primal (Pearlman), who tries scaring off a pair of hikers. Hot on his trail is fan-favourite Optimus Prime (Peter Cullen), who pops out with a loaded minigun, with the intent to protect them.

Transformers: Rise of the Beasts trailer is out. Paramount Pictures has dropped a trailer for the hotly-anticipated reboot, which promises a ton of metallic mayhem, based on the Beast Wars storyline. Directed by Steven Caple Jr. (Creed II), the film introduces the beast-like Maximals and Terrorcons to the existing battle on earth, between the Autobots and Decepticons. Set in the '90s, the trailer offers a first look at Ron Pearlman's Optimus Primal, the gorilla-like leader of the Maximals, who serves as the harbinger of bad news. Transformers: Rise of the Beasts is slated to release in June, of next year.

American actress Zendaya slays in a sheer bodysuit as she...