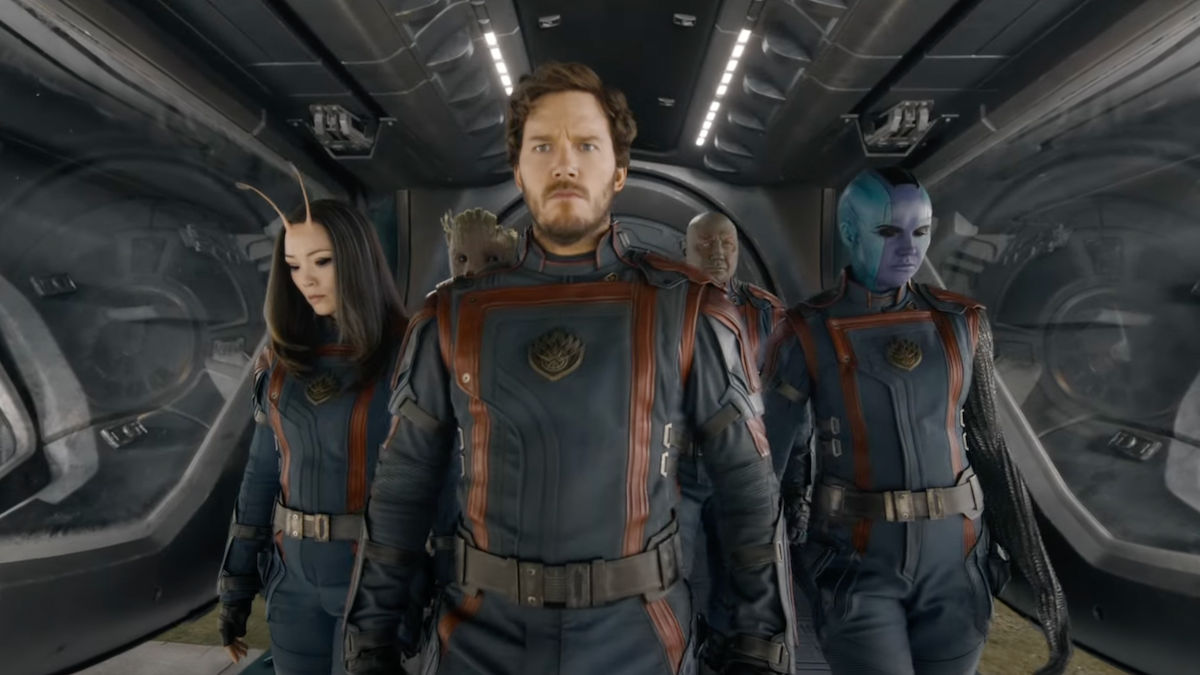 The Guardians of the Galaxy Vol. 3 trailer then cuts to show the movie's emotional side, as our heroes struggle to cope with the aftermath of the Blip.

Don't forget where we came from,” Mantis (Pom Klementieff) says, while we're presented harrowing visuals of Rocket Raccoon's (Bradley Cooper) past locked in a cage, subjected to strange lab experiments, and being separated from his friend Wal Rus.

Elsewhere, the alternate version of Gamora (Zoe Saldaña), who is now working with the Ravagers, tries explaining to Quill that the person he fell in love with is no longer here and that she's unable to reciprocate those feelings.

Among the stars, we see our heroes leap into a fleshy, spiral thing, that resembles one of those biblically accurate angel depictions seen online. It's also worth noting that the Guardians are dressed in brightly coloured space suits, which they've never used while traversing the galaxy in the past.

Trouble comes in the form of Chukwudi Iwuji's (Peacemaker) The High Evolutionary, a scientist who seeks to take what he views as lower life forms and enhance them into a "perfect species".

Will Poulter's gold-tinted Adam Warlock also makes a brief appearance, before we see Groot (Vin Diesel) resort to using firearms, standing back-to-back with Star-Lord, and yelling, “We are Groot!”

The filmmaker now works at DC Studios as the co-CEO, alongside producer Peter Safran, and will oversee all upcoming DC Comics movies, TV series, and animation projects. Over on Twitter, the director also confirmed that he plans to interconnect some video games to the larger DC Universe as well.

Music has always been a trademark in Gunn's movies, with the Guardians of the Galaxy Vol. 3 trailer following suit, as our space bandits head into their next astral journey, with Spacehog's “In the Meantime” playing away. “We were gone for quite a while,” Peter Quill (Chris Pratt) says, as their ship carefully plops onto a new planet.

But no matter what happens next, the galaxy still needs its Guardians.” We've arrived at an earth-like planet, inhabited by bipedal aliens with anthropomorphic faces, who seem rather hospitable at first, with one of the kids tossing a ball towards Drax (Dave Bautista), wanting to play with him.

Of course, the muscle-headed brute responds by chucking the ball right back into the girl's face, causing the neighbourhood to turn hostile and pelt rocks at our heroes.

Guardians of the Galaxy Vol. 3 trailer is finally here in English and Hindi. At this year's Comic-Con Experience, in Brazil, Marvel Studios dropped the trailer for James Gunn's third and final chapter that serves as a fitting end to our intergalactic outlaws' arc.

While not presenting itself as a bloodbath The Suicide Squad be prepared for your heartstrings to be plucked, as the trailer delves into Rocket Racoon's background, while the group is still reeling from Gamora's death in Avengers: Endgame. Guardians of the Galaxy Vol. 3 is the second entry in the Marvel Cinematic Universe's Phase 5 lineup, and releases in May, next year.

American actor Brad Pitt opens up about dealing with life...

Britney Spears asks fans to respect her privacy after police...

A classic battle epic in The Woman King : Film Review