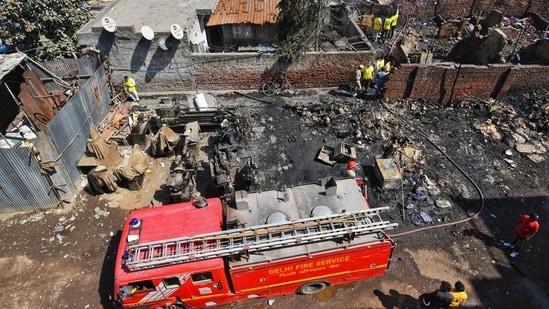 The fire engulfed around nine shanties with ground plus one-storey structure. Electric wiring, doors and windows, plastic sheets, clothes and some other household items at these places were damaged in the blaze, but no casualty was reported," he said, adding that the fire was extinguished around 10 pm.

After the fire broke out, personnel of police department, fire brigade, staff of the Mumbai Port Trust as well as ambulances were rushed to the site.

The cause of the fire is being ascertained, the official said.

A fire engulfed around nine shanties in a slum in Reay Road area of Mumbai on Sunday evening, but nobody was injured in the incident.

The blaze erupted around 7.21 pm in a hutment near Mariam temple at Ganesh Nagar in Kaula Bunder area, he said.

A Security supervisor stabbed to death by colleague in...

A Doctor sentenced to 10 years for sexual assault : Hyderabad