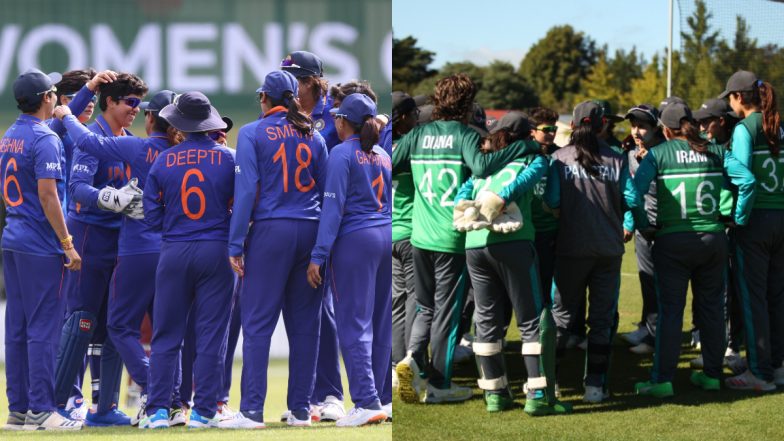 Intermittent showers meant the match start was delayed by 45 minutes with the game reduced to 18 overs a side.

Compared to the women’s cricket opener between India and Australia, fans flocked to the 25,000 capacity stadium though it did not seem like an absolute sell out.

Renuka Singh started with a rare maiden in the T20 format. Three balls later, Pakistan were one down with no runs on the board as pacer Meghna Singh induced an outside edge off opener Iram Javed’s bat with a ball that shaped away.

Skipper Harmanpreet Kaur went for the extra all-rounder in the playing eleven, bringing in Sneh Rana at the expense of spinner Rajeshwari Gayakwad.

India showed an approach that they have been trying to play with for the last couple of months and it would have most definitely pleased captain Harmanpreet Kaur.

Mandhana’s special effort comprised three sixes, including a step out hit off spinner Tuba Hassan for her half-century. A seemingly effortless loft over cover of pacer Diana Baig in the third over was also of the highest quality.

It was the second time this year that an Indo-Pak contest failed to produce a close game with India winning comfortably against their opponents even in the 50-over World Cup in New Zealand.

However, the much-anticipated fixture of the Commonwealth Games lived up to the hype off the field with fans turning up in big numbers at Edgbaston.

Pakistan’s decision to bat first backfired as Indian bowlers put the choke on the batters to bowl them out for a meagre 99 all out in the 18 overs-a-side contest after rain delayed the start of play.

Spinners Sneh Rana and Radha Yadav stood out with two wickets each.

The chase was clinical too with Smriti Mandhana 63 not out off 42 balls arguably the most attractive batter in women’s cricket, flaunting her range of strokes on way to a fine unbeaten half century.

The result was India gunned down the target in just 11.4 overs.

India brought their desired ”killing attitude” to the fore under pressure as they put up a ruthless performance to beat arch-rivals Pakistan by eight wickets and boost their chances of a semifinal berth at the Commonwealth Games here on Sunday.

The India to Tour New Zealand for White-ball Series after...