Sources Say" Congress Likely to Get 4 Ministerial Berths in New Government in Bihar. 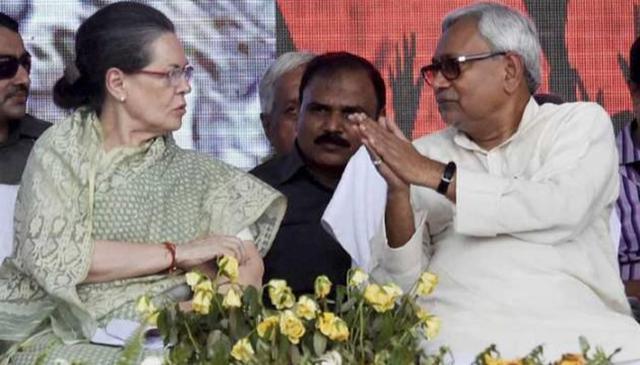 A meeting of the RJD-led Grand Alliance, comprising the Left and the Congress, also took place at Rabri Devi’s house, where all the MLAs are said to have signed a letter to support Kumar.

Nitish Kumar is understood to have told JDU)legislators and MPs, at a meeting he convened at his official residence, that he had been driven against the wall by the BJP which tried to weaken his party, first by propping up Chirag Paswan’s rebellion and later through its former national president RCP Singh.

Relations between the BJP and the JDU have been worsening in the wake of disagreements over a host of issues including caste census, population control and the ‘Agnipath’ defence recruitment scheme.

Earlier, the Congress said it will be a part of the non-BJP alliance in Bihar to help strengthen secular forces.

The party said that like in Maharashtra where it helped stitch together the Maha Vikas Aghadi (MVA) government by supporting the Shiv Sena which was ideologically different from it, it will align with Kumar who has been with them in the past.

Ours is an ideological battle and we are not fighting for power.

Because Nitish Kumar is leaving the BJP and coming over, we will support him," he said, adding the Congress will take whatever steps that are needed to strengthen secular forces and defeat the communal forces.

Congress is likely to get four ministerial berths in the new government in Bihar as JD(U) leader Nitish Kumar snapped ties with the BJP and joined hands with the RJD-led alliance, sources said on Tuesday. Sources said Kumar spoke to both Congress president Sonia Gandhi and Rahul Gandhi soon after resigning from his post of chief minister. He is also learnt to have thanked the Congress leadership for extending support in the formation of the new government.

Besides the four ministerial berths, the Congress has also sought the post of Speaker of the state assembly, but Kumar is not keen on giving that, sources said. The Congress has 19 MLAs in the 243-member Bihar Assembly while the JD(U) has 45, RJD 79, CPI(ML) 12, and CPI and CPI(M) each have two legislators.

The BJP has 77 MLAs in Bihar while the Jitan Ram Manjhi-led Hindustani Awam Morcha (HAM) has 4. The House has one Independent MLA while one seat is vacant.

Bihar Congress president Madan Mohan Jha and the party’s in-charge of Bihar affairs Bhakta Charan Das were present at the meeting of Nitish Kumar, Tejashwi Yadav and leaders of other parties. All 19 legislators of the Congress later attended a dinner meeting at the residence of the CLP leader in the Bihar assembly in Patna.

Top Congress leadership in Delhi however, remained silent on the developments in Bihar and confabulations over the new government formation in the state.